All for Joomla All for Webmasters

Signposts on the sports fields give the following safety instructions to pacemaker wearers and people with other implants:

“Safety notices: This sports facility is equipped with magnetic timing gates, but can be fully used by athletes with pacemakers or other implants for normal sporting activities. It is recommended that athletes with implants maintain a safety distance of 25 cm (approximately 10 inches) between the implant and the individual magnetic points (in the ground). The strength of the magnetic field on the ground corresponds to that of a standard wall magnet. It is recommended not to place other objects sensitive to magnets directly on the magnetic points. In these cases too, a distance of 25 cm, or approximately 10 inches, from the ground is sufficient. For more information, see http://smartracks.run/safety-instructions/.”

While this is sufficient information for most users, others want to understand in more detail what that means.

We are cautious about making broad statements about how pacemakers might behave in permanent magnetic fields as created by SmarTracks Timing Gates. We are not medical professionals, so we cannot offer guidance on pacemaker safety.When asked about safe levels of magnetic fields for pacemakers and other medical devices like ICDs (implantable cardioverter defibrillator), we will always advise to consult a physician for this information.

While we find it important to adhere to the safety statement above, it does little to help you as a pacemaker wearer to understand the level of risk involved. It is of course not possible for us to understand the magnetic susceptibility of every pacemaker and ICD ever implanted.

However, we summarize the state of the scientific literature on the influence of static magnetic fields on the safety and functionality of cardiac pacemakers and other implants. This overview can help you, as the wearer of a pacemaker or other implant, to assess the risks associated with the normal use of SmarTracks Timing Gates.

What field strength is OK?

Several authoritative sources mention 5 Gauss or 10 Gauss (respectively 0.5 and 1.0 milliTesla = mT) as the maximum magnetic field in which a pacemaker should operate properly. These are typical values that regulators require from pacemaker manufacturers.

Since 2003, all European manufacturers have been obliged by the European standard EN 45502-2-1 to design pacemakers in such a way that static magnetic fields up to 10 Gauss (1 mT) have no influence on safety and functionality. [1]

An investigation of the EU Working Directive in 2015 by the Federal Ministry of Labor and Social Affairs concludes that the safety and functionality of pacemakers in static magnetic fields is also guaranteed at a magnetic field strength of up to 7 Gauss (0.7 mT). [3]

The International Commission on Non-Ionizing Radiation Protection (ICNIRP) Guidelines state that “Based on scientific knowledge on the direct effects of static fields on humans, acute exposure of the general public should not exceed 400 mT (any part of the body). However, because of potential indirect adverse effects, ICNIRP recognizes that practical policies need to be implemented to prevent inadvertent harmful exposure of people with implanted electronic medical devices and implants containing ferromagnetic materials, and injuries due to flying ferromagnetic objects, and these considerations can lead to much lower restriction levels, such as 0.5 mT (IEC 2002).” [4]

A report on pacemakers and music players from Boston Scientific, one of the major manufacturers of pacemakers, states that, “[a]s described in the pacemaker and defibrillator instructions for use, exposure to strong magnetic fields >10 Gauss (1 mT) may alter implanted device function.” [6].

A paper from the Institute for Biomedical Engineering University in Switzerland, Interference of neodymium magnets with cardiac pacemakers and implantable cardioverter-defibrillators: an in vitro study, also described a 10 Gauss (1 mT) limit. [7]

Medtronic, another major manufacturer of pacemakers and ICDs, after a request from K&J Magnetics, indicated a 5 Gauss (0.5 mT) limit for DC magnetic fields.

Since this topic is a critical medical issue, we suggest like K&J Magnetics deferring to the lowest, most conservative value of 5 Gauss (0.5 mT).

How do SmarTracks Timing Gates work?

SmarTracks Timing Gates In-Ground are based on strong permanent magnet arrangements buried below the surface of an artificial track, under an artificial turf field or other surfaces. Each individual gate consists of two magnetic rods (MCDs) (typically one right and one left of the individual running lane).

As the MCDs are typically buried perpendicular to the track, looking at the ground they only represent a small point (around 25mm wide – 1 inch wide). As they are buried nobody can get into direct contact with magnetic material. Magnetic fields directly at those points on the ground can be larger than the recommended 5 Gauss (= 0.5 mT) thresholds mentioned above. These points are comparable to small kitchen magnets or whiteboard magnets on the ground. As magnetic fields degrade quite rapidly we have defined a 25cm (10 inch) zone around each of these individual points. We recommend pacemaker or ICD wearers not to get their devices closer than 25cm (10 inch) to those points on the ground.

The following images illustrate how MCDs are integrated under the surface. A vertically integrated MCD sits a minimum of 2.5cm (1 inch) below ground level, depending on application also significantly deeper.

In rare cases where the surface does not allow vertical integration, the MCD is integrated horizontally. Horizontally integrated MCDs represent a rectangular area of around 500mm in length, and 25mm in width, with the two extremities of the MCD each generating a magnetic field as described above.

We performed reference measurements to illustrate the drop of the magnetic field as you get further away from the MCD. As you can see from the graph below, the magnetic field generated by the MCDs already falls below the 5 Gauss (= 0.5 mT ) limit indicated above at a 20cm distance, starting from the top of the MCD itself. For maximum security we recommend a safety distance of 25cm (10 inch) from the ground up. 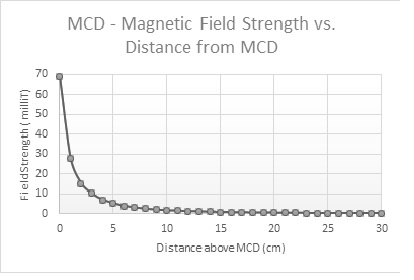 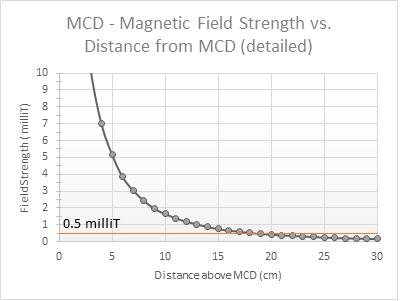 The magnetic field strength of an integrated Timing Gate typically lies around 1.0 mT at ground level. For comparison, the strength of a smartphone cover magnet can lie around 1.5 mT, and magnets inside a tablet were measured to be over 3.5 mT.

As we move further away from the MCD in the ground, the magnetic field strength continues to drop significantly. The typical field strength produced by the MCD at 1 meter from the ground up, which is the equivalent of the height where the sensor typically sits, is below 0.2 Gauss (0.02 mT).

Based on the current state of scientific literature and the results of our reference measurements, we can derive insights into the impact of SmarTracks Timing Gates on the safety and performance of pacemakers in normal use. These insights can help you, as carriers of a pacemaker or other implant, assess the risks associated with the normal use of our Timing Gates.

Normal Use of SmarTracks Timing Gates for Pacemaker Wearers

For any person wearing a pacemaker or similar device in normal use they would run or walk on a SmarTracks enabled lane through a gate. Being upright during walking and running results, depending on the actual body height, in a typical distance of the pacemaker device or ICD of more than 1 meter from the individual SmarTracks point. In that distance, the maximum magnetic fields resulting from crossing a SmarTracks Timing Gates are already typically smaller than 0.1 – 0.2 Gauss (= 0.01 – 0.02 milliTesla) and as such considerably smaller than the safe values of < 5 Gauss (or 0.5 milliTesla) discussed above. As a comparison, the earth magnetic field, while it varies according to the actual geolocation, is generally around 0.48 Gauss (or 0.048 mT) and bigger than the maximum signal caused by SmarTracks Timing Gates. We recommend carriers of pacemakers and other implants to uphold a safety distance of 25 cm from the floor.

[7] Interference of neodymium magnets with cardiac pacemakers and implantable cardioverter-defibrillators: an in vitro study. Available at: https://www.ncbi.nlm.nih.gov/pubmed/18334784.